I caught Department of Eagle’s late show at Cafe du Nord last night–such a big treat.  DOE’s descent on the city was like the parting of the clouds in the midst of the darkness of January.

Cafe du Nord runs that fine line between a romantic old world establishment and dive-y underground club, which made it perfect for Department of Eagles.

Some musings attempting to avoid over-analysis:

The band does amazing things with tempo and the syntax, if you will, of songs.  Since Department of Eagles isn’t confined by a pop paradigm of song writing, it isn’t just the drums (and coming from Bear they are excellent) that get to have fun.  Melody gets to have it’s own energy; rising and falling trotting and plodding as the mood strikes.

As I was listening to the show I was thinking about how I was enjoying it, and how the way I was enjoying it was not dissimilar to the way I enjoy masterful emcees like Biggie and perhaps some jazz (both the former and the latter being successful in song syntax, according to my definition); and I ruminated on how silly it would be to reduce this music to the label of “folk.”

After a lovely show, Dan and Fred were nice enough to make a few notes for readers of ARL.  Here’s what they had to say: 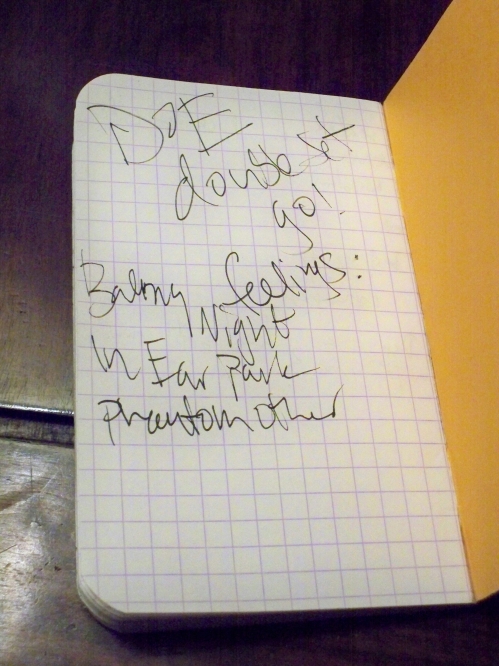 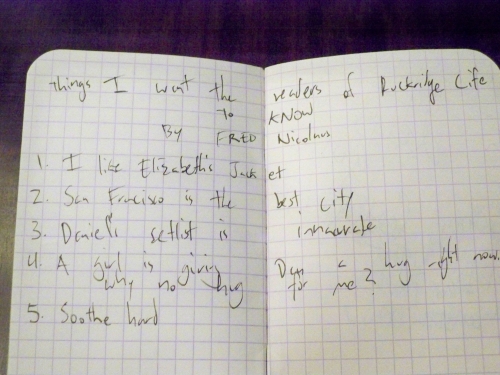 The things Fred wants the readers of ARL to know

If you live in Portland or Seattle and want to check them out hit up the website for ticket information.

One response to “Department of Eagles@Cafe du Nord”