There’s nothing like spending a hot day in a hot kitchen to get you in touch with your Southern roots–and today was hot.  But this journey started yesterday–a much milder morning.

Peach season is at its peak, and if you don’t seize the moment it will pass you by.  I had a glorious morning yesterday at the Grand Lake farmers market.  I bought tons of peaches at different levels of ripeness, with the intention of making a series of cobblers over the next few days.  Blossom Bluff Orchard had great, perfectly ripe peaches.  I couldn’t decide between O’Henry (slightly tarter) and Summer Lady (slightly sweeter) so I decided to get four of each for the first cobbler.  And since I was using Lee Bailey’s recipe, which calls for seven large ripe peaches for a 7″x9″ deep dish, and I only have an 8″x10″ deep dish, I figured eight medium-to-large ripe peaches would serve me well.

I got home and started preparing the dough.

While I was doing that, I decided to heat up a snack in the microwave.  Being at the end of a long line of Southern ladies who typically distrust such kitchen technology as a matter of principal, I made a mistake that only a microwave novice would–I stuck my finger in my food to check if it was hot yet–due to my utter disbelief that it *could* be hot after one minute in this strange contraption.

Well, apparently that specious technology has come a long way.  My food was hot.  So hot that I burned my finger badly.  It hurt so badly I had to keep it on ice for a full two hours.

I feebly refrigerated the dough with my nine remaining digits with the intention of returning to the project the next day.

Today went much better.  The burn had settled down, and I had nothing to distract me from my baking other than myself.  So I took my time. 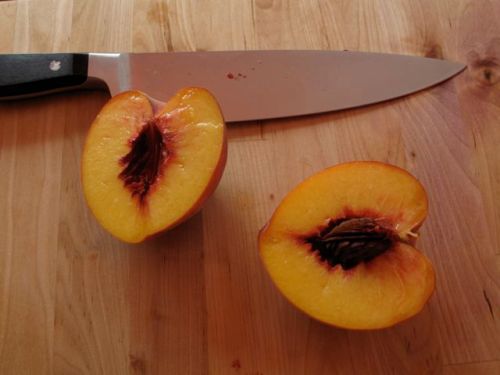 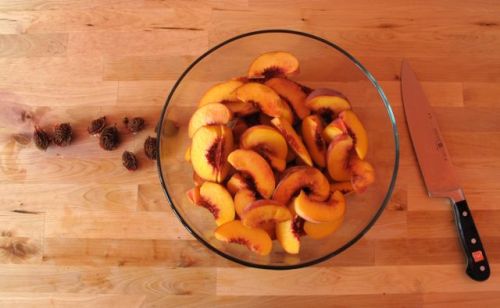 After some deliberation, I decided to leave the skins on my peaches.  Maybe Bailey would turn in his grave–but I totally missed the line in the ingredients section of the recipe about skinning the peaches.  Anyway I like the skin–the flesh of any stone fruit attached to the skin is always my favorite part because it’s usually where the tart-ness lies, which balances all the sweet.

The hardest part of this truly simple recipe was rolling out the dough.  I just don’t do enough baking to know how to roll out dough very well.  Luckily, the recipe didn’t call for a perfect circle, but the rolling still made me anxious.  After I reverse-rolled (“window-shade style”) and released the dough over the dish, I knew right away I didn’t have enough.  The dough is supposed to spill over the sides while you fill the dish with the fruit, to later be flopped back over on top to cover it. 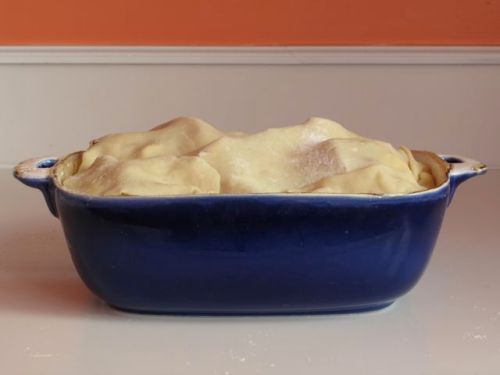 But before I covered everything with dough, I made a few adjustments.  Bailey’s recipe calls for a full cup of sugar.  It seemed like a lot of sugar.  So instead of a full cup I did two-thirds.  And my oven, purchased in 2007, has never been calibrated.  Bailey recommends forty-five minutes (or until crust is golden brown) at 450.  I set my oven to 450 and checked the cobbler after thirty-five.  It looked good, but could be slightly more golden, so I gave it another five minutes.  Here it is cooling on the porch:

I decided I had to eat it for dinner.  I hadn’t picked up the vanilla ice cream but I just couldn’t wait. 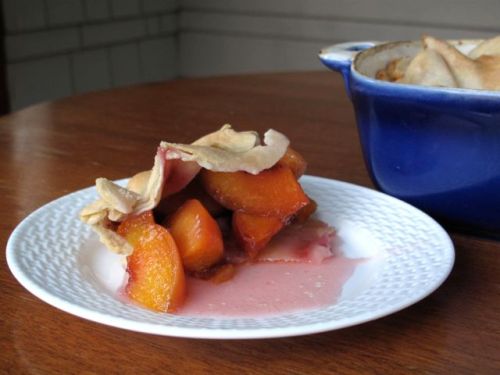 I utterly enjoyed eating this cobbler.  Spooning the first portion was incredibly gratifying–largely because the color that these peaches produced in this recipe is phenomenal.  The deep orange and red is perfect, and the liquid produced by the cooking is this gorgeous pink-wine.  And the crust–the crust is it.  I couldn’t hope for a better one.

Now it’s my first cobbler of the season and I don’t want to speak too soon, but it was a bit on the sweet side for me.  The peaches were perfectly cooked–great balance of firm and soft (and I didn’t think the attached peels detracted), but to be truly critical, the bites with that bit of tart punch which I crave were too few and far between.  The peaches I used were very sweet to begin with, so if I were using similar fruit I might try to reduce the sugar to a minimum–just enough to create a good syrupy interior–without adding too much sweetness.  Perhaps a third of a cup.

I’m sure I’ll continue to enjoy eating this one–and in the mean time I’m ready to try another.